CBD AND THE ENDCANNABINOID SYSTEM

Even before researchers discovered the endocannabinoid system, cannabis has had a medicinal role for millennia. Historically, practitioners have used it to treat myriad health issues including pain, convulsive disorders, and digestive ailments. Investigation into the benefits of cannabis led to the discovery of chemical compounds within the plant called cannabinoids.

There are over 80 different types of cannabinoids present in cannabis, depending on the cultivar. The two most frequently referenced are Cannabidiol (CBD) and delta-9-tetrahydrocannabinol (THC). CBD is a non-intoxicating cannabinoid. THC is intoxicating.

Scientists isolated cannabidiol for the first time in the 1940s. However, it wasn’t until the mid-1960s that research into the psychotropic effects of the plant led to the isolation of THC by Dr. Raphael Mechoulam and colleagues. The discovery of CBD and THC sparked an interest in the scientific community for further research. Their discoveries illuminated the unique properties of these compounds and how they are utilized by the human body. Ultimately, this led to the discovery of what has become known as the Endocannabinoid System (ECS).

The ECS is a set of cell receptors in the human body and a specific set of molecules that are capable of attaching to those receptors. These molecules and receptors function in a way that is similar to a circuit and battery. There are two primary receptors on this pathway, CB1 and CB2. CB1 receptors reside primarily within the central nervous system, as well as throughout the body in lower concentrations. You can find CB2 receptors on immune cells and in blood cell precursors, as well as other bodily tissues.

Chemical compounds that bind to these receptors and activate the pathways are called agonists, while those that bind and prevent the pathway from being activated are called antagonists. THC is considered an agonist, as it can bind directly to the CB1 and CB2 receptors to “turn on” those pathways. Activation of these pathways have been shown to influence several systems associated with anxiety, pain, appetite, fear, stress, mood, inflammation, memory, and more. 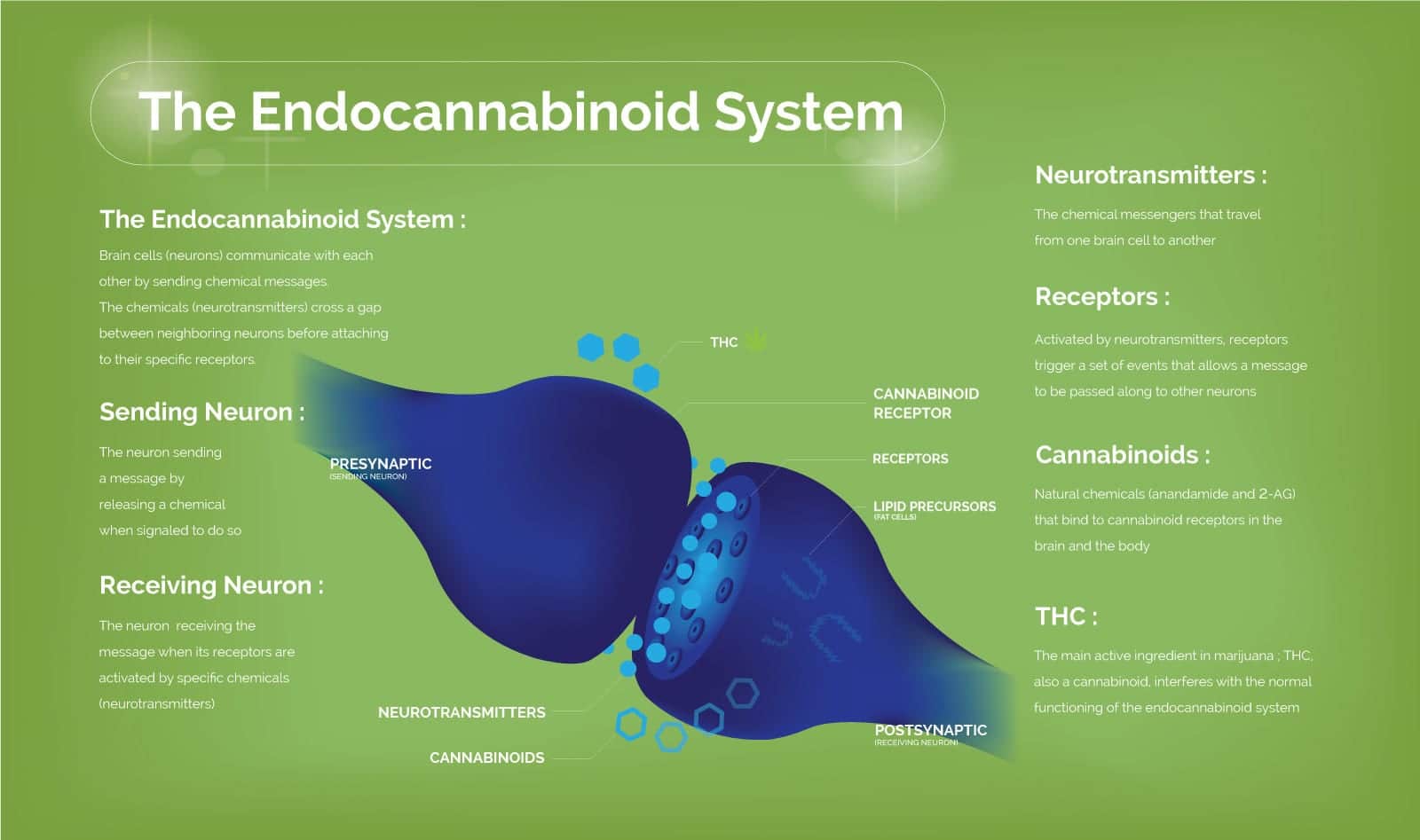 Cannabinoids are not made naturally by the body, so the presence of receptors that were specifically triggered by these compounds made scientists question whether the body produced its own chemicals similar to cannabinoids. Further digging revealed a set of endogenous (internal) molecules that are manufactured by the body and activate this pathway, dubbed endocannabinoids. There are two primary endocannabinoids: anandamide, also known as the bliss molecule (from the sanskrit word ananda meaning bliss), and 2-Ag (2-arachidonoyl glycerol).

Anandamide and 2-Ag both function in a way similar to THC; they bind to CB1 and CB2 receptors, and activate the pathways those receptors connect to. In addition to acting as agonists for the ECS, anandamide and 2-Ag are also antagonists for a separate receptor, known as the vanilloid receptor, which is responsible for pain regulation. Studies show that 2-Ag has significant neuroprotective effects on the brain by reducing harmful reactions in brain tissue.

In addition, researchers discovered two enzymes responsible for metabolizing (processing/altering) endocannabinoid compounds, Fatty acid amide hydrolase (FAAH) and monoacylglycerol lipase (MGL). CB1 and CB2 receptors, endocannabinoids, and enzymes interact in different ways to produce a series of chain reactions along the ECS. The target receptors, the tissues they are in, and the type of molecules triggering the receptors determine the specific effects.

Unlike THC, cannabidiol doesn’t really bind to either of the CB receptors. However, many studies have shown that CBD has a significant effect on the functioning of the ECS. Many scientists believe that CBD exerts its influence by interacting with FAAH to prevent the enzyme from breaking down anandamide present in the body. By inhibiting FAAH, the amount of circulating anandamide increases. This means that the positive effects anandamide has along the ECS pathways increase, too.

Additionally, CBD is a powerful antioxidant, is capable of increasing the production of 2-Ag (an ECS agonist), and interacts with other receptors in the body beyond the ECS to produce a wide range of beneficial medicinal effects. Studies also suggest that CBD has the potential to modulate the psychoactive properties of THC in certain ratios. Current research is especially important. Scientists are exploring CBD’s potential anti-inflammatory ability and anxiety management, among others. Although the FDA prohibits us from making medical claims, you can view published studies on the effects of CBD through the PubMed database.

The more researchers delve into understanding the ECS, the clearer it becomes that it plays a role in almost every bodily system: from regulating the nervous system, to influencing reproduction, and supporting the gastrointestinal tract. In addition, recent research has focused on the anticonvulsive properties of cannabinoids in regulating seizure disorders, anti-anxiety effects on people with post traumatic stress disorder (PTSD), and improving brain function in patients with Alzheimer’s disease. It appears that science has only discovered the tip of the iceberg. Consequently, CBD’s true potential is yet unknown.

For further information, you can read this interview about CBD and the ECS with Dr. Raphael Mechoulam, an expert on cannabinoid based medicine. Additionally, If you have more questions about the ECS or CBD, feel free to contact us at Beyond Botanicals. We will feature your questions in a future post!

In conclusion, this is a brief overview of the functioning of a very complex system intended to provide basic understanding. There are many resources that can provide an in-depth explanation of the more complicated functioning of the endocannabinoid system. To help you start, we listed some of the resources used for this article below. If you want to try CBD, we offer a multitude of CBD oil products with free shipping!